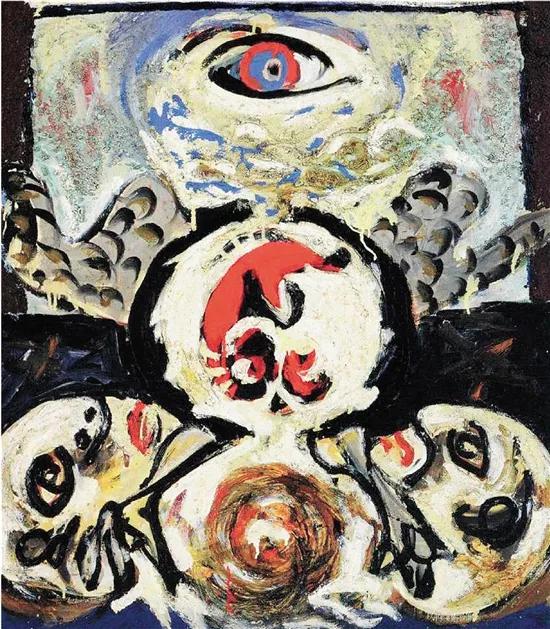 Recently, Netflix's documentary "faking the real: the true story of fakes" has aroused heated discussion on the Internet. This documentary has made the public focus on a $80 million fraud case that shocked the whole art circle 10 years ago.

The protagonist of the case, the nordler Gallery, opened in New York City in 1846. In its early stage, it participated in the creation of the American art market and played an important role in the industry. After that, nordler Gallery spent 150 years in peace, with its painting taste constantly changing. The civil war, World War I and World War II never interrupted its inheritance. Until the end of 2011, because of this fake painting storm suddenly completely closed down, or because an unknown Chinese artist Qian Peichen died. Qian Peichen was born in Zhoushan in 1939 and grew up in Shanghai. He studied in the Mathematics Department of a normal university at the university stage. After graduation, he worked as a mathematics teacher in Lu Xun middle school in Hongkou District of Shanghai. However, Qian Peichen never gave up his love for painting and always taught himself painting under limited conditions. In 1979, Qian Peichen participated in the "twelve people's painting exhibition" held in Shanghai. This exhibition is a historic event in the early days of reform and opening up when Shanghai's painting creation returned to active. Although this exhibition is a joint exhibition of many kinds of paintings, the "twelve people painting exhibition" has the most prominent influence in the oil painting industry. In his history of Chinese oil painting, Liu Chun commented that the oil paintings exhibited in the exhibition were "works with modern artistic style which were publicly displayed for the first time since 1949". This exhibition is an important turning point in Qian Peichen's artistic career. Shortly after the exhibition, Qian Peichen got the opportunity to travel in the United States. This exhibition is also Qian Peichen's exhibition mark in the history of Chinese art before he went abroad.

When he first arrived in the United States, Qian Peichen studied sketching and printmaking at an art school in New York called the New York Art Students' Union. Later, Qian Peichen became a street painter. Until the end of the 1980s, Qian Peichen met Carlos Diaz and grafila Rosales on the street, and they asked him to imitate the works of Jackson Pollock, mark Roscoe, mather Weil and other abstract expressionists - not simply copy, but according to the characteristics of these masters, to create. Since 1998, Rosales has taken Qian Peichen's imitation as an authentic one to the nordler Gallery, one of the top galleries in New York at that time. Rosales told the gallery that the paintings were works unknown to the masters, and the exact source needed to be kept secret. Among the buyers, there are many collectors and appraisers in the industry who have failed to identify the authenticity of these imitations. One of them is de sol, a collector who once served as CEO and chairman of Gucci group and chairman of Sotheby's board of directors. In 2004, Mr. and Mrs. de sol spent 8.3 million US dollars to buy a copy of Qian Peichen's "mark Roscoe" work "Untitled" at the nordler gallery. In de Sol's eyes, "nordler gallery is the most trustworthy, the oldest and the most important Gallery", so that he never thought that the masterpieces sold in it were actually by a Chinese painter.

On November 29, 2011, rich Pierre rolanzhi plans to sell his collection, a Pollock painting, which he bought from the famous nordler gallery for $17 million in 2007. Luo Ranzhi sent the painting for judicial examination, and found that the painting contained a yellow pigment that had not appeared before the 1970s. The untitled 1950 signed by Pollock was completed in 1950, and Pollock died in 1956. As a result, this shocking fraud case happened. According to a US police investigation in 2013, Qian Peichen copied at least 63 masterpieces. Nordler Gallery received $43 million in revenue and Rosales $20 million. However, Qian Peichen's service fee is very small, which is difficult to be included in it. The only two recorded were $5400 in December 2005 and another $7000 in February 2008.

As for how a Chinese middle school mathematics teacher's work can deceive so many authorities in the industry, Shao Dazhen, a famous art theorist, once said that abstract expressionism has the basis of sketching, but it is not realistic, it is abstract expressionism. This kind of painting pays more attention to artistic talent. For example, Pollock's realistic skills are not enough, but their expressive power is very strong. Compared with the works of classical masters with high realistic ability and great difficulty in skill, abstract expressionism is more to give play to its expressive ability. It is easy to explain the forgery as the exploration and technique of different periods, so it is easy to imitate without being seen through. On the legal issues involved in this case, the reporter interviewed Zhou Lin, director of the art law center of the Central Academy of fine arts. As for the definition of the boundary of copying a master's work, Zhou Lin said that copying is a way to learn painting, which can be used to improve painting skills and personal appreciation. However, if it is a copy of a work that is still under copyright protection, it will be suspected of infringement if it is sold on the market. If the copycat conspires with the gallery to sell the copy as the original, it is suspected of a crime. There are various situations in the sale of counterfeit goods in galleries. The collapse of the 165 year old nordler gallery shows that it may involve a large amount of counterfeit goods, or even fraud, which has been discredited. This is the price that must be paid for fraud and dishonesty. As for whether buyers should also be held responsible, Zhou Lin told reporters that in reality, some buyers know whether to buy fake or not, or they don't know about it at all. These need to be combined with specific cases and can only be judged after knowing all the facts.