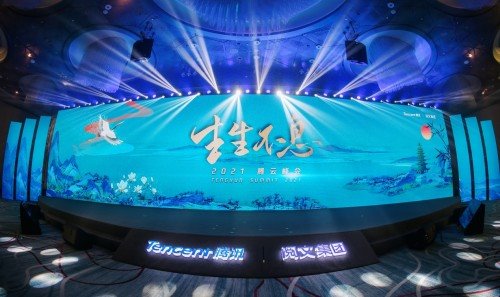 On June 8, the 2021 Tencent Cloud Summit hosted by Tencent and China Reading Group and undertaken by Tencent New Cultural and Creative Research Institute was held in Shanghai. During the Shanghai International Film and Television Festival, the Tencent Cloud Summit, as an important part of the "New Cultural and Creative Week", left Beijing for the first time and went to Shanghai to hold it, paying tribute to Shanghai and the contemporary culture that originated in Shanghai. With the theme of "Endless Life", the summit set up three forums: "The Glorious Times of Chinese Culture", "Telling Chinese Stories Through Film and Television", and "Historical Classics and IP Ecology", and invited 27 domestic and foreign experts, scholars and new cultural creations. Practitioners will speak, discussing the integration of technology and humanities, activating traditional culture, and telling Chinese stories.

In March 2018, Tencent first put forward the concept of new cultural creation-a new cultural production method with IP construction as the core. For more than three years, Tencent’s new cultural and creative matrix has covered a variety of digital cultural forms such as online literature, animation, film and television, music, e-sports, games, etc., creating a rich, diversified and dynamic content ecology, not only accelerating the development of Tencent’s business sector. The upgrade has also played a leading role in the development of China's cultural and creative industry.

Based on years of business practices, Tencent is also constantly asking about the macro value of New Cultural and Creative Industries. At the Tencent Cloud Summit, Cheng Wu, vice president of Tencent Group, CEO of China Reading Group, and CEO of Tencent Pictures, delivered a speech under the theme of "Building a New Vision of New Cultural Creativity, Prospering in the Flood of the Times". Shared the exploration and thinking of Tencent's new cultural creation.

The senior executives of the International Council of Philosophy and Humanities (CIPSH) under the UNESCO also appeared at the Tencent Cloud Summit, expressing their concern and recognition of Tencent's new cultural and creative in promoting the development of digital humanities and promoting the integration of technology and humanities.

Louis Woosterbeek, chairman of the International Council of Philosophy and Humanities, said in a video speech that Tencent and the International Council of Philosophy and Humanities are strategic partners, and the two sides have a high degree of consensus on the importance of humanities to the entire world. Tencent's new cultural creation itself is the integration of technology and humanities, helping to promote the development of digital humanities.

In May, at the European Humanities Conference in Portugal, Cheng Wu attended the opening ceremony and delivered a speech, sharing Tencent's new cultural and creative thinking with more than 3000 experts and scholars from all over the world.

Xiong Bingzhen, secretary-general of the International Council of Philosophy and Humanities, is the chief expert on CIPSH’s new cultural and creative project. He has conducted a half-year investigation of Chinese online literature using reading as a case, and believes that online literature is an effective medium for cultural exchanges between China and foreign countries. New cultural creation is silent, and it is the best way for traditional culture to approach young people."

The Ming Dynasty guqin song "Autumn Hong" made a stunning appearance in the opening performance of the Tencent Cloud Summit. This piano piece is collected by the Forbidden City. It was completed by Yang Zhijian, a non-genetic inheritor of Guqin production and a special Guqin expert invited by the Forbidden City after three years. During the performance, six scenes of the piano score of "Autumn Hong" were played on the big screen of the summit, which embodies the integration of technology and traditional art. It is another successful attempt by Tencent to revitalize the traditional culture of the Forbidden City. Yang Zhijian hopes that science and technology can help Guqin artists to perform notation and other work in the future.

Li Jingze, vice chairman of the Chinese Writers Association, pointed out in his speech that the so-called "birth" is the great virtue of heaven and earth. This is not only the continuation of the race, but also includes production and life, building a vibrant and civilized world.

Liu Yuzhu, former director of the State Administration of Cultural Heritage, gave a speech and shared the thoughts on cultural relics work by digital technology. Liu Yuzhu believes that the role of modern technology in the excavation, protection, and inheritance of cultural relics cannot be ignored. Three points should be paid attention to in digital technology and the activation and utilization of cultural relics: problem-oriented, deepening cognition; institutional design, promoting implementation; learning and reference, courage Innovation.

At the roundtable forum chaired by Chao Gejin, member of the Chinese Academy of Social Sciences, practitioners and scholars of new culture and creativity also expressed their views on this topic.

Reading Group platinum writer Haoyou2 said that on the basis of respecting history, the way of writing for online writers is to take care of everyone's emotions, create together with everyone, and complete a work with readers.

Yang Chen, vice president and editor-in-chief of China Reading Group, said that before the mainstream of online literature was fantasy themes, the past two years have clearly seen the rise of realistic themes, including the involvement and description of traditional culture, and more and more related works.

Zhu Xiaofeng, director of the Digital Information Office of the Institute of Literature of the Chinese Academy of Social Sciences, said that everyone has an impulse to participate in history. Many people write novels about historical themes because they want to be involved; historical themes are an inexhaustible treasure house. It is natural to be popular in the literary market.

Ye Shuxian, the first senior professor of humanities and social sciences at Shanghai Jiaotong University, said that humanistic literacy is the basic quality to become a civilized person. Technology can help humanities develop better, and technology and humanities need to be integrated.

Yin Hong, a professor at the School of Journalism and Communication of Tsinghua University and vice chairman of the Chinese Film Association, believed in his keynote speech that Chinese stories in film and television have attracted much attention, and Chinese stories should go out and become world stories. For this reason, he suggested that we should deeply explore the humanistic tradition in Chinese culture, promote the creative transformation and innovative development of Chinese stories, open up new content, open up new channels, and carry out new cooperation.

Teng Xiaolan, a well-known writer, original author of the TV series "Heart House," and screenwriter, said that when he created "Heart House" he wanted to reflect the current living conditions of various groups in Shanghai.

Mao Jian, a professor of the Department of Foreign Languages ​​at East China Normal University and a film critic, believes that the important aspect of telling Chinese stories through film and television is to tell the daily life of the Chinese people well, and that the daily life in China will be endless.

Zhi Feina, a researcher at the Film and Television Research Institute of the Chinese Academy of Arts, said that the continuous improvement of the quality and taste of Chinese audiences has stimulated film and television works to better tell Chinese stories.

In traditional history and culture, the largest IP is Twenty-Four History. Wang Shi, chairman of the Chinese Culture Promotion Association, told the story of more than 300 historians who took 27 years to create the "Twenty-Four History of this Annotated Edition". The twenty-four historical texts in classical Chinese represent the solemnity of China and the beauty of Chinese classical literature. A kind of restraint, not only kept the classical Chinese, but also put the new notes in the book. The Twenty-Four History of the Annotated Edition today provides an easy-to-read history, "The meaning of history is realized in the encounter between the text and the reader."

Focusing on IP development and transformation, Xinwenchuang has built a very dynamic ecology. At the roundtable forum hosted by Fudan University professor Yan Feng, the work "Da Feng Da Geng Ren" by the great writer of China Reading Group, "Seller Xiao Langjun", won the "Expected Works of the Year Adaptation" award at this year's Reading Original IP Ceremony. I am worried about the film adaptation of the work, and I am more looking forward to it. I also understand the different presentation methods of film and television dramas and novels.

Gu Tingting, the chief architect of the game IP of "Tianya Mingyue Knife", said that IP development and transformation are about shaping all kinds of people, shaping the collision relationship between these people and the tension brought about by this relationship.

Zhang Mingyang, deputy editor-in-chief of Pear Video, believes that taking the historical IP transformation as an example, firstly, authors need to have values, secondly, they must conform to the historical background and logic, and thirdly, they must set up suspense under the principle of not changing historical results.

Zhang Xiaoming, deputy director of the Chinese Culture Research Center of the Chinese Academy of Social Sciences, believes that Chinese history is long enough and stories are rich enough to be an important source of cultural creation; only when stories become IP can they be understood by the public, and IP can promote people to understand stories and history.